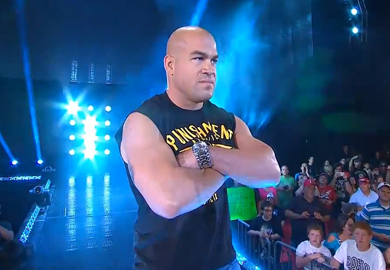 Last summer, Tito Ortiz (16-11-1 MMA) retired and was inducted into the UFC Hall of Fame. So, one of the big questions following Bellator’s recent pay-per-view announcement of Tito vs. Rampage was… why? “The People’s Champion” explained his reasoning for returning to the cage during Monday’s Bellator MMA press conference:

“I got an offer I couldn’t refuse for my future, and not only my kids and family, but pretty much everything I’ve done in mixed martial arts(MMA). I’ve done everything under the sun to get the sport where it is today, everything I have is because of this sport. I’ve fought with heart, integrity and determination like no other fighter has done. I’ve been through every surgery that any athlete has been through and I’ve prevailed through it…. I’m in a good place mentally, physically and emotionally like no other. And with me being in the position that I am now, I had that hunger to be great again…. This is going to be one of the biggest fights of 2013 — I believe in the whole future [of Bellator]. Bellator was the one to make this fight happen. As I said, they gave me an offer I can’t refuse. My future is solidified and I’m happy about it. The company that I used to work for, I had to beg for tickets, I had to beg to be a part of it. A whole year went by and I waited … and waited … until I couldn’t wait any more. I have to think of the future of my children and I’m doing this.”