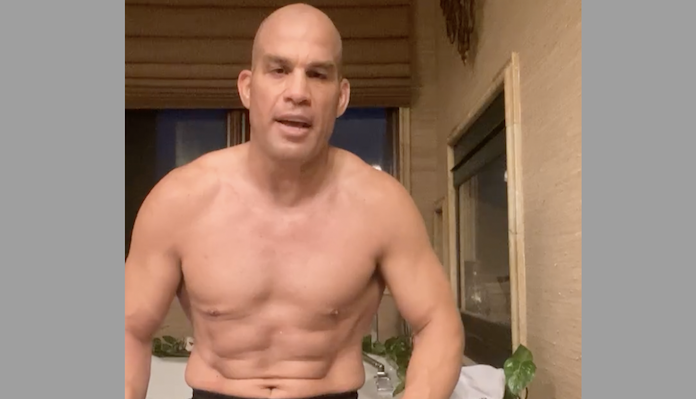 UFC Hall of Famer Tito Ortiz revealed that he is “probably 212 pounds” just five days out of his boxing match against Anderson Silva.

Ortiz takes on Silva this Saturday night in what is his first professional boxing match. The fight will take place in Florida after it was moved when headliner Oscar De La Hoya got sick with COVID-19 and was replaced by Evander Holyfield, who will now fight Vitor Belfort in the main event. Due to Holyfield being 58 years old and coming into the fight on such short notice, the California State Athletic Commission wouldn’t clear the fight to take place there, which necessitated the entire card being moved down to the state of Florida, instead.

The Ortiz vs. Silva fight sort of came out of nowhere and on paper, it’s kind of a strange matchup considering that Ortiz spent the majority of his career at 205lbs and Silva at 185lbs. But Ortiz agreed that he would fight Silva at a 195lbs catchweight, and now, before the fight in the ring against Silva, he has a fight on the scale against his weight cut.

Taking to his social media to provide an update on his weight, Ortiz confirmed that he has about 17lbs to cut still in order to make the 195lbs weight limit this Saturday night.

“I gotta get down to 195lbs. I’m probably in the 212lbs department, 211lbs, around that. Feel great, though. Had a good day working with Jason Parillo and Jay Silva. We did some light sparring,” Ortiz said. “Ths weekend, live from the Seminole Hard Rock Casino, I’ll be facing Anderson Silva. I’ll be kicking his ass. I hope he’s ready for a fight. I’m not coming there to collect a paycheck. I’m coming there to collect a win, get a W, take some names, kick some ass.”

Do you think Tito Ortiz will successfully make the weight limit of 195lbs for his boxing match this weekend against Anderson Silva?