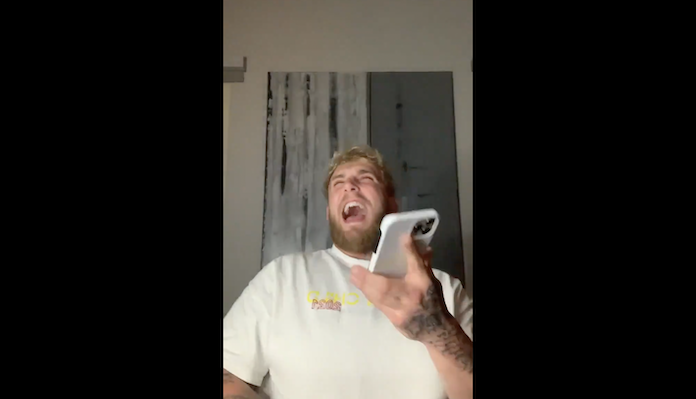 Jake’s brother Logan Paul takes on Mayweather next month in an exhibition boxing match. Ahead of the big fight, Mayweather has been doing the rounds with his interviews to promote the fight, and this week he did one on the Clubhouse app. Paul found out that Mayweather was going to be on the hat and he decided to troll “Money” about it, bringing up the “gotcha hat” incident that recently took place at the pre-fight press conference.

Taking to his social media on Thursday night, Paul shared a funny video of him trolling Mayweather on the Clubhouse app and referencing the infamous “gotcha hat” moment.

“Floyd is doing this interview right now on stage on this app called Clubhouse. I’m going to sneak on stage and say ‘gotcha stage,’ let’s see how this goes,” Jake Paul said in the video before jumping into the chat. “Hey, Floyd. Gotcha stage! Gotcha stage! Get off of Clubhouse, my brother is going to beat your ass.”

Paul might be confident in his big brother’s abilities, but at the same time, he’s taking on one of the all-time greats in the form of Mayweather, and it seems like a tough fight. The betting odds that originally came out for the contest featuring Mayweather against Logan Paul were astronomical, with Mayweather pegged as a -5000 betting favorite to take home the exhibition fight. Even though his brother Jake is confident that Logan can get the job done and is trolling Mayweather about it, there is a reason why the odds are the way they are. Either way, the Pauls know how to make things interesting for the fans, that’s for sure.

Do you think Logan Paul can pull off the upset against Floyd Mayweather?