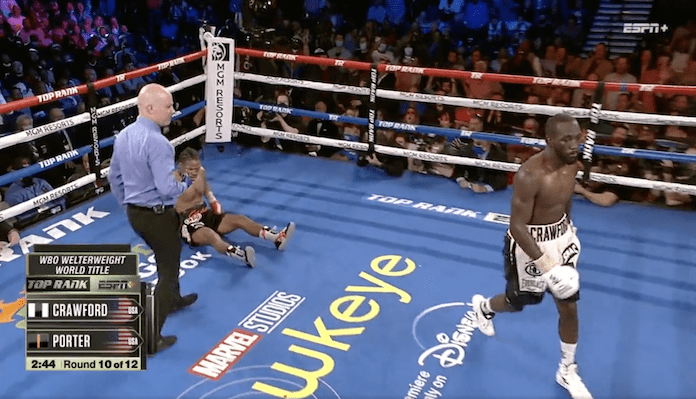 Boxing superstar Terence Crawford knocked out Shawn Porter in the 10th round of their boxing match that took place on Saturday night.

Crawford vs. Porter was one of the most highly-anticipated boxing matches of the year, and it went down on Saturday night. It turned out to be a back-and-forth fight, but in the 10th round, Crawford scored two knockdowns, which led to Porter’s corner stopping it. Below, take a look at the vicious knockdown that led to Crawford getting his hand raised.

Crawford improved to 38-0 as a professional boxer with the victory. He has won 29 fights by way of knockout as he has shown the world of pro sports that he is one of the top pound-for-pound boxers on the planet. Crawford has been ultra-impressive so far inside the boxing ring ever since he turned pro back in 2008. Since then, he has run through everyone in his path as he has moved into becoming one of the best pound-for-pound boxers in the whole business. At the moment, Crawford has won nine of his last 10 fights by stoppage as he is punching his opponents so hard they cannot continue to compete.

As for what is next for Crawford, we will likely find that out in short order. He is one of the best boxers in the world right now and after defending his WBO welterweight title again, there will be a long list of opponents who want to step into the ring with him. Overall he is one of the biggest names in the game right now and there is no reason why he can’t continue to show off his skills and keep knocking his opponents out in a vicious fashion when he possesses the power that he does.

What do you think is next for Terence Crawford after knocking out Shawn Porter?