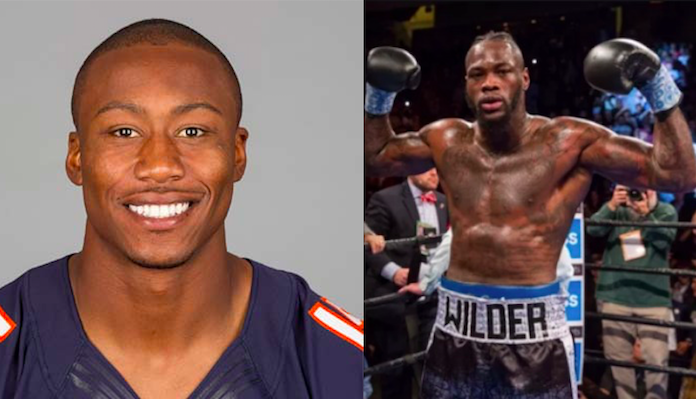 Marshall, now 36 years old, starred in the NFL from 2006 to 2018 for seven teams, including the Chicago Bears and the Denver Broncos. The 6’5″ tall receiver made six Pro Bowl teams throughout his professional football career and was twice named to the All-Pro team, but he retired after the 2018 season. Since then, Marshall has kept in shape by boxing, and he has in the past teased making his professional boxing debut. After training for the past several years, Marshall believes he’s now ready to enter the ring in 2021, and he’s shooting for the top right away in the form of Wilder.

Speaking to TMZ Sports, Marshall explained how confident he is that he will “outclass” and “outbox” Wilder, suggesting it would be a big PPV seller, as well.

“You haven’t seen me on Pay-Per-View. No, I don’t have a win under my belt, or a loss, or a knockout. But at the end of the day, I know how to fight, I know how to box, I know the sweet science.”

Marshall has zero professional boxing fights to his credit, but he wants to test himself, and for him to make it worth it, it’s going to have to be against Wilder. The former NFL star says you can’t compare the power that Wilder possesses to his, but Marshall believes that he would be the better pure boxer if they ever fought.

You can’t compare me to Deontay Wilder, I’m not Deontay Wilder. Deontay Wilder, obviously, we know him for his power. He’s a freak athlete. But what I’d say, I would challenge Deontay Wilder to dive a little deeper into the sweet science, and that’s where I think I separate myself from a lot of these heavyweights,” Marshall said.

Do you want to see Deontay Wilder fight Brandon Marshall?