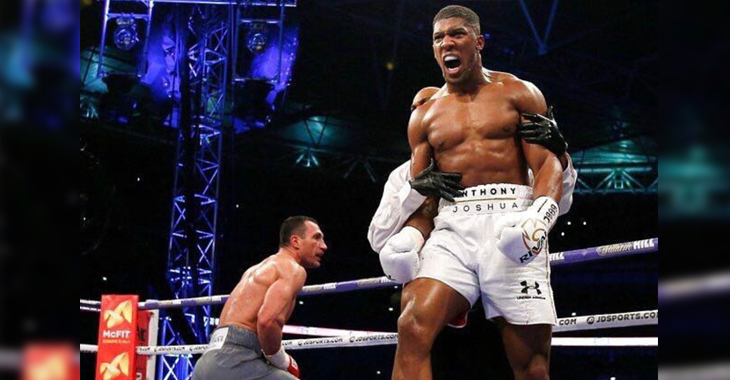 Back in April, English heavyweight boxing standout Anthony Joshua competed against heavyweight icon Wladimir Klitschko in a highly anticipated heavyweight title fight. Despite being dropped early in the fight, Joshua fought back to pick up an 11th round TKO win over Klitschko to keep his undefeated record in tact, and win the WBA and IBO heavyweight titles.

The fight has been hailed as one of the best of the year, and has garnered so much hype regarding a rematch, that one is already being targeted for November. Promoter Eddie Hearn spoke to SkySports about the rematch, saying:

“I met with the MGM and met with the T-Mobile Arena, Vegas is the front runner and November 11 is the date that is pencilled in.”

“It will probably take a couple of weeks to get everything over the line, but I believe Klitschko will take this fight and believe Vegas will be the one. AJ has been over there for about 10 days and has enjoyed himself and got to know the area a little bit.”

“The amount of British fight fans that would travel there, it will be a momentous occasion and one that we will savour for a long time so fingers crossed it’s a party in Las Vegas on November 11.” Showtime’s Stephen Espinoza agreed with Hearns’ plans for a rematch, explaining how massive of a fight the rematch would be:

“It’s no secret we’ve been salivating about getting him over here and certainly that would be a phenomenal fight,” said Espinoza.

“It would be the biggest heavyweight Vegas fight in probably a couple of decades, so we would love to host it. That’s a massive mega-fight wherever it is. The first fight was a star-making performance and for many here in the US, it was their introduction to Anthony Joshua.”