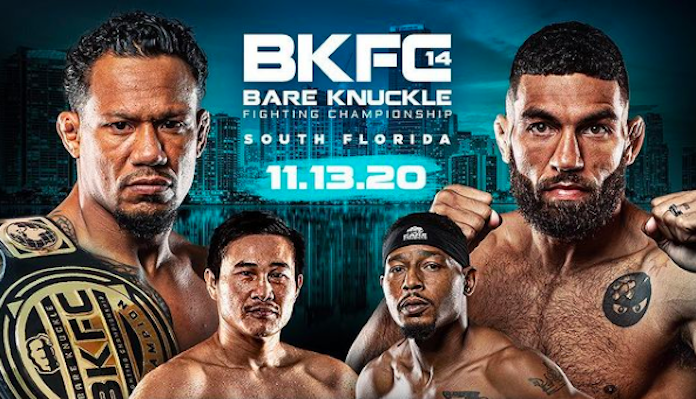 This Friday, Bare Knuckle Fighting Championship will return to our screens with the intriguing BKFC 14 card in Miami, Florida.

BKFC 14 will be topped by a 155-pound title fight between champion Luis Palomino and top contender Jim Alers. The pair were originally expected to meet for the vacant lightweight title in July, but Alers was forced out of the matchup when members of his camp were exposed to COVID-19. He was then replaced by fellow UFC veteran Isaac Vallie-Flagg, who Palomino defeated by first-round stoppage to claim the vacant belt.

With that win, Palomino, a veteran of the World Series of Fighting cage, improved to 2-0 under the BKFC banner, having also defeated Elvin Leon Brito in his promotional debut.

Alers, on the other hand, will step into the cage at BKFC 14 with a 4-0 promotional record, composed of wins over Elvin Leon Brito, Leonard Garcia, Julian Lane, and most recently, Kaleb Harris.

BKFC 14 will be co-headlined by an interim 135-pound title fight between Dat Nguyen and Reggie Barnett Jr. Nguyen, a former pro boxer, will enter this fight with a 2-0 BKFC record, while Barnett is 5-1 under the BKFC banner, with his lone loss coming against undisputed bantamweight champ “Brutal” Johnny Bedford. The winner of this matchup is expected to get the next crack at Bedford, who is currently sidelined with an injury.

See the full BKFC 14 card below (via Tapology):

BKFC 14 will air on the Bare Knuckle TV app. Will you be tuning in for this stacked card?