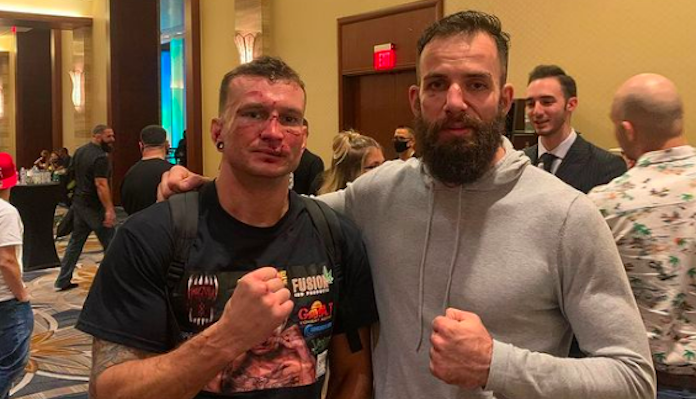 Francesco Ricchi won his BKFC 14 fight with Noah Cutter, but is now in a medically induced coma due to complications stemming from the fight.

Ricchi defeated Cutter by third-round TKO at BKFC 14, but absorbed a damaging punch to the trachea during the fight. After his victory, he was taken to the hospital for an exam, where a surgery reportedly caused complications that led to him being put in a medically induced coma.

Cutter, Ricchi’s opponent, was the first to share this news, issuing a statement wishing his foe well on social media.

“Prayers and best wishes to my opponent Francesco,” Cutter wrote in a post on his Instagram story after BKFC 14. “I’ve been informed he’s in the hospital in a medically induced coma due to bleeding in his lungs from a hematoma in his trachea due to a throat punch during the fight. Obviously accidental.

“We come out here to hurt each other but I never want to see this for an opponent. Prayers from my family. Heal up.”

After a report from MyMMAShow.com, MMA Fighting obtained a statement from BKFC President David Feldman.

“First and foremost our thoughts are with Francesco and his family at this time as we pray for a quick and full recovery,” Feldman stated. “The injury did not deter Francesco from a victorious result on Friday night but complications during the surgery at the hospital have resulted in a greater issue to his health.”

While Ricchi’s medical expenses will be covered to some degree by the fight-night insurance required in Florida, Feldman told MMA Fighting that BKFC “will be there for Fransesco and his family if needed.”

The team at BJPENN.com sends its best wishes to Francesco Ricchi and his family during this difficult time. Stay tuned for further updates on his condition as new information emerges.