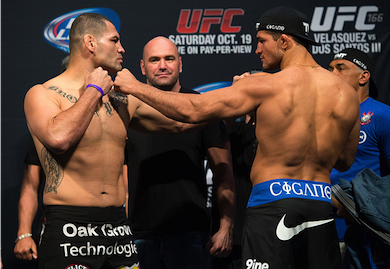 Out of the UFC’s 400+ fighters currently signed to the roster, who hits the hardest?

That’s essentially like asking, who that hardest trained puncher in the world is, right?

Some of the fighters mentioned were Dan Henderson, Mark Hunt, Johny Hendricks, Robbie Lawler & BJ Penn, but ultimately this is what the guys had to say:

UFC TONIGHT Host Kenny Florian on who’s the hardest puncher in the UFC: “I’d say Junior dos Santos. Not only is he a heavyweight and has the power, but he also has the speed. If he catches you, he’ll knock you out.”

Sonnen on the hardest puncher in the UFC: “I’d have to go with Vitor Belfort. He has the speed and accuracy and when he hits you, he’s looking to knock you out.”