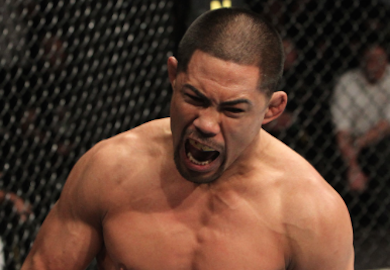 On May 31, Mark Munoz headlines UFC Fight Night 41 in Berlin, opposite, Gegard Mousasi.

Both men are top middleweight contenders, and both are coming off losses to Lyoto Machida. The winner moves forward and etches himself one-step closer to a title shot, and Munoz told ‘UFC Tonight’, that it is he, who will be ‘in his opponents face’

Mark Munoz on fighting Gegard Mousasi: “He’s a very good striker. He wants to keep it on his feet. He likes to fight forward. I like when guys stay in front of me. It’s a great time to take somebody down.”

Munoz on what he learned about Mousasi watching his last fight: “He likes to pop forward. As Lyoto was getting angles, Gegard had to set feet to set up the power shot. When he set his feet, I’ll be in his face. I’m going to light him up.”

Munoz on getting assigned to cards outside the US: “It gives me a chance to travel. I’d love to fight in the United States. But I’ve never been to Berlin. It’s a historic city. I’d like to visit the Wall and I’d like to crumble Mousasi’s wall there, too.”

Munoz on who has the advantage between Weidman and Machida: “The key to victory for Chris is to close the gap and take it to the ground. For Machida, his key is to catch him coming in with knees and strikes. That’s what he’s good at. It’s very hard to pin him down. I’d say Chris has the advantage, though, because I feel he can close the gap, put Machida on his back and has very good jiu-jitsu.”