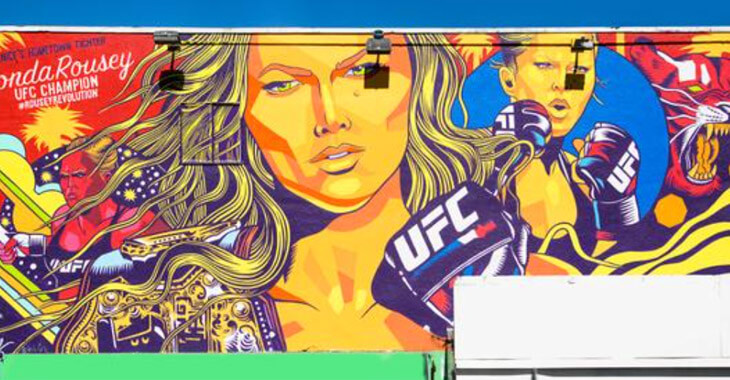 Venice Beach is a very unique stretch to walk through in California. From Muscle Beach to the murals seen all over the neighborhood, Venice is also home to UFC champion Rounda Rousey.

In honor of all her accomplishments – and, we would imagine, to hype her November 14 fight with Holly Holm at UFC 193 – UFC’s Dana White and Lorenzo Fertitta recently commissioned a painting of Rousey in her hometown of Venice, California. And on Friday, they unveiled it to the champ (and her dog, Mochi).

“She is almost like a comics hero,” the artists said in a statement. “We are fans of Ronda. Her last fight was in Rio against a Brazilian fighter, and despite that, everyone loves her in Brazil. What is really fascinating about Ronda, besides being an undefeated fighter and also being very secure of her femininity, is that she looks real and authentic. She looks like a really cool girl. We would love if she could learn us a few fighting tricks!”

Will you be making the trip out to Venice Beach to get a glimpse of the new piece of Rousey? You might just get the chance to run into the champ in her neighborhood.