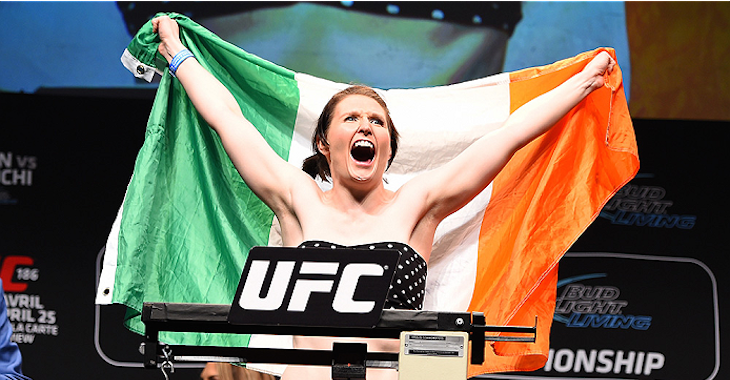 Aisling Daly has fought in front of her hometown crowd in Dublin, Ireland several times before under the Cage Warriors banner. After making the rounds through Bellator and Invicta, the Ultimate Fighting Championship came knocking and Daly was signed on as a participant for “The Ultimate Fighter 20”.

In the meantime, UFC ran their first card in Dublin, Ireland with UFC Fight Night 46 which saw 9,500 rabid fans cheering on Conor McGregor as he knocked out Diego Brandao in the first round. While the event was taking place, Daly was filming “TUF” and couldn’t even watch her teammates fight on the card. Now, just days away from her return to Ireland with “UFC Fight Night: Duffy vs. Poirier”, she is ready to bring the house down.

“The Irish fans get behind their own,” Daly told UFC.com. “I’m aware of how the crowd are going to react. I’m aware of the sound experience I’m going to have. I’m ready for all that. That crowd is all there for me, screaming for me, cheering for me. Everyone is going to be against her. It’s no pressure for me. It’s just going to be enjoyable to be able to walk out to that crowd.”

Daly will be looking to get back to her winning ways when she meets Ericka Almeida in the octagon this weekend. Who do you think will walk out of the cage with their hand raised in victory? Share your thoughts in the comment section below!