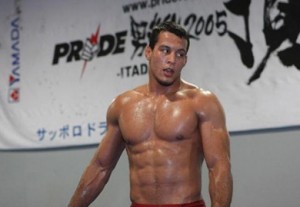 Brazilian Jiu Jitsu ace, Vinny Magalhaes was one of the sports most promising prospects. An eventual loss to Ryan Bader in the Ultimate Fighter Finale was just a glimpse of the hurdles Vinny would be forced to overcome in the UFC’s famed Octagon.

Outside of the UFC he has been able to put together an impressive 9-3-1 record, however once he steps inside the Octagon and under the bright lights of the biggest Mixed Martial Arts promotion he fails.

Vinny’s UFC record is 1-3 over the course of his two-stint tenure with the promotion and his upcoming bout against Anthony Perosh at UFC 163 is s do or die and likely his last shot at not only keeping his UFC contract, but ever fighting for them again as well, and he knows it…

“The biggest thing to prove to myself is that I belong with the elite fighters, he told Fight! Magazine. I should be fighting the elite fighters, which means fighting in the UFC. I just want to fight in the UFC period I don’t care if I’m fighting top-10, top-five opponents. If you’re in the UFC, you’re fighting top fighters and I just want to prove I belong in there. If I lose this fight I deserve to be cut. And I’ll be pretty honest actually, the way I performed in my last fight I could be cut right now. They didn’t have to give me this chance against Anthony Perosh. But the UFC gave me this chance and I want to prove I can be much better than I did last time. But I want to prove to myself that I can be in the UFC and that I belong there.”