Home » UFC NEWS » JDS | Jon Jones Would Be A Tough Challenge At Heav... 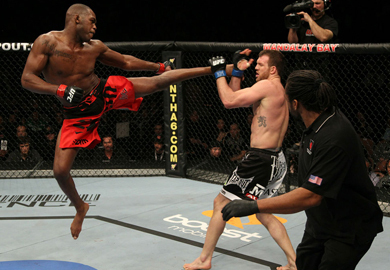 Since his first successful title defense over Frank Mir at UFC 146, possible opponents for Junior dos Santos have ranged from Roy Nelson, a rematch with Cain Velasquez, and even a fight with the current light-heavyweight champ, Jon Jones.

Now, Dana White has stated numerous times that he wants Jones to stay at light-heavyweight, but that won’t stop fighters and fans alike from picturing what that fight would look like.

Even though Dana White has almost guaranteed that Velasquez will get the next shot, Dos Santos stills weighs the possibility of a super-fight with ‘Bones’ on Spike TV’s “MMA Uncensored Live” when asked how he thinks Jones would fare in the heavyweight division.

For the time being, Jones has an opponent in Dan Henderson while Dos Santos will most likely battle either Velasquez or Alistair Overeem upon his return, given that he has an injury-free training camp.