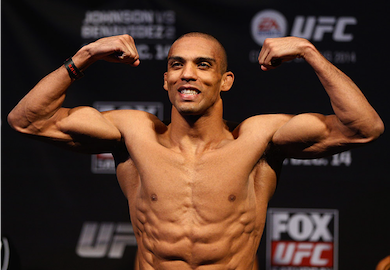 Danny Castillo made it look like he wanted nothing to do with Edson Barboza standing. Multiple takedown attempts were stuffed at the start of the fight, and this forced Castillo to try and set them up. This allowed Barboza to connect with a few leg kicks and it looked like he started to gain momentum.

Danny Castillo rocked Edson Barboza with a right hook that made him fall to the ground. Barboza popped right back up but Castillo jumped on him and rocked him with a handful of strikes. Barboza was taken down to the ground and Castillo advanced immediately to full mount. He transitioned to Barboza’s back and locked in the rear naked choke, but Barboza escaped by grabbing the fence. After taking more punishment, Barboza spun right into another rear naked choke but once again escaped with the help of the cage. Castillo would spend the remainder of the first on top of Barboza ground-and-pounding his way to what should have been a 10-8 round.

Edson Barboza would start the second round strong, landing leg kick after leg kick and they were brutal. Barboza started to loosen up and landed a vicious spinning back kick to the body that launched Castillo to the other side of the cage. Castillo ignored the leg kicks and didn’t even bother checking them.

Neither man showed a sense of urgency at the beginning of the third, but Barboza continued to land ridiculous leg kicks. Castillo landed two right hands and his hometown crowd started to get behind him, but the buzz around the arena slowly faded when Barboza landed a spinning back kick to the body that caused Castillo to keel over in pain.

The fight would make it’s way to the final horn, and it was obvious that Edson Barboza had gotten the best of Danny Castillo.