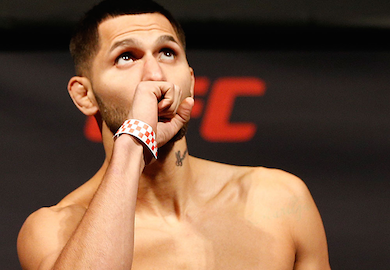 This started out as a classic ‘Grappler vs. Striker’ bout. When Pat Healy was given the opportunity to take the fight to the ground he did and he excelled. Whenever the bout was in the center of the octagon, it was not close at all. Jorge Masvidal was able to pick apart Healy opponent with strikes which likely gave him the nod from the judges for the decision.

The first and second rounds were close as they shared an even amount of time in their favored areas, but Masvidal did more damage than Healy.

The third round saw a role reversal as Masvidal controlled a majority of the round on the ground. Healy executed a belly-to-back slam on Masvidal but he simply brushed it off and rolled through for a leg lock. Healy defended intelligently but still ended up on the bottom. Masvidal could not transition into a more advantageous position and the fight found its way standing in the middle of the octagon.

Both fighters were showing signs of fatigue in the closing moments but were still throwing leather.