UFC FN 49 Results: Dariush Forces Martin to Submit in Round 2 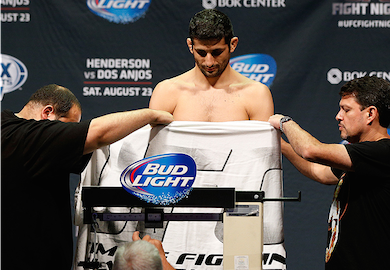 Beneil Dariush took the backseat in the fight rather quick as Tony Martin established a comfortable striking range early on. Dariush was not doing well with adjusting to Martin changing levels and he ate some serious shots. Dariush overthrew on the majority of his punches which cut his combination-attempts short.

Martin was grapple heavy and expended a lot of his energy trying to keep Dariush in place. Dariush took Martin down late in the second round and took advantage of an exhausted Martin. Dariush transitioned to mount easily and was immediately able to sink in the head-in-arm choke. A tired Martin was not able to defend the hold at all and was forced to submit.

Beneil Dariush def. Tony Martin by way of Submission (Head In Arm Choke) 3:38 of Round 2