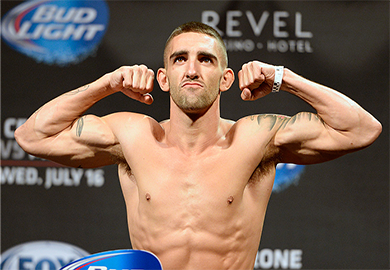 Joe Proctor was quick, precise and selective tonight in his performance against Justin Salas. Proctor mentioned in his post fight interview that he has been working on finishing exchanges with his left hooks due to the fact that Salas was a southpaw. The left hook landed multiple times throughout the fight and eventually won it for him in the third.

Proctor kept a safe distance from Salas which prevented him from shooting for takedowns. This also allowed Proctor to pick his shots and choose when and where he would go in for attacks. On the flip side, whenever Salas got within shooting distance, Proctor had to guess if he was actually going to shoot or if he was going for one of his wild hooks.

One of Salas’ wild hooks landed and Proctor sported a HUGE hematoma at the end of round one. Even though it looked graphic, Proctor was allowed to continue the fight and he should be thankful it went on.

He countered Salas with a left hook that took his equilibrium away. Salas was able to get back to his feet and rely on Proctor to stand up by clinching him. Salas pushed away and went for a wild hook, but Proctor cut him off with a quick left hook that shook his head violently.

Salas fell to the ground and Proctor went in for the kill. The referee stopped the fight and although it looked a bit premature, Salas was not going to recover anytime soon.