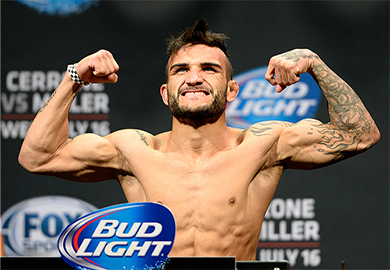 Flyweights John Lineker and Alptekin Ozkilic put on a hard-hitting display in their fight tonight on Fox Sports 1.

Lineker proved to the world tonight that he has the heaviest hands in the flyweight division. This may have confused some viewers, though, as Ozkilic took a lot of punishment before he was finally knocked out. Ozkilic has one of the toughest chins in the octagon today and he showed a lot of heart in his performance.

Lineker controlled the center of the octagon early on and dictated where the entire fight went. His ability to pin Ozkilic up against the cage-wall and fire off with uppercuts and body shots gained him a lot of momentum throughout the fight.

Ozkilic eventually took one punch too many and fell victim to a double left-hook combination. Lineker stunned him with the first left then proceeded to drop him with the second. With nine seconds remaining, he jumped on Ozkilic and struck him until the referee pulled him off.

John Lineker def. Alptekin Ozkilic by way of TKO (Strikes) 4:51 of Round 3