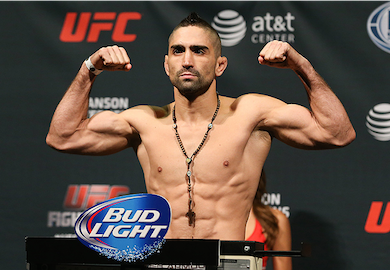 Number-three ranked featherweight Ricardo Lamas played his veteran role well in the octagon tonight and utilized the judges’ criteria to pick up the unanimous decision win. Even though he was not landing the majority of his shots, he threw at high volume while controlling the octagon which will always look good in the eyes of the judges.

That is not to say Lamas did not get any offense in, however. He did a decent job at peppering Dias throughout the first and second rounds but it was not until the third round where he gained some real momentum. He got the back of Dias and threatened a backpack rear naked choke. Dias, standing, simply broke Lamas’ hook and dumped him to the ground.

Dias picked his shots in the first ten minutes and he landed some powerful blows. It was a surprise to many that Lamas was not wobbled once, but he kept his ground and stayed standing. Dias’ strategy of offense may not have been flashy, but it was surely effective.

Nova Uniao fighter Hacron Dias may not have picked up the win tonight, but Ricardo Lamas was a great test and it is clear Dias will soon be ready for opponents of this caliber.