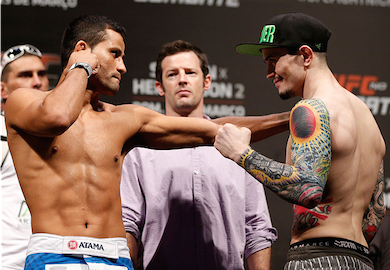 As part of our live fight night coverage, BJPENN.COM, invites fight fans to join us for our preliminary card play-by-play and live results on tonight’s UFC event in Brazil.

If you do not have a UFC Fight Pass subscription or cannot make the preliminary portion of tonight’s card, join us here for all your blow-by-blow and round-by-round updates.

Round 1 –  Pepey lands a big uppercut. Lahat rushes in, lets the clinch go. Leg kick from Lahat. Wild shots from both fighters. Lahat lands a good right hand. Lahat clinches, Pepey has him against the cage. Fighters release. Another leg kick from Lahat.  Big overhand right from Pepey lands. Flying knee from Pepey connects and knocks Lahat out cold. Wow!

Result: Pepey wins via Knockout at 2:39 of Round one

Result: Robertson wins via Submission (rear naked choke) at 1:45 of Round one

Result: Formiga wins via Submission (rear naked choke) at 3:07 of Round one