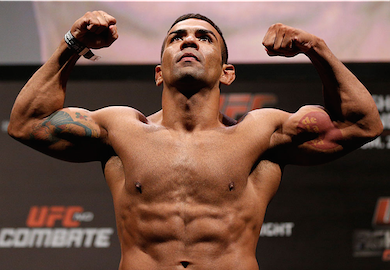 Mairbek Taisumov had an issue following the rules of the octagon in his second UFC bout.

He suffered a point deduction in the first round after he nailed Michel Prazeres with an illegal up-kick. The referee also noticed that Taisumov had grabbed the fence to defend a takedown in the first round and continued to do so in the second round. The referee opted to deduct another point in Round 2 due to the fact that Taisumov continuously was grabbing the fence to avoid takedowns. Taisumov almost grabbed the fence again in the third round and was issued one final warning before being disqualified. Not a fun night for Mairbek Taisumov at all.

The rest of the fight told the age-old story of ‘Striker vs. Grappler’. Michel Prazeres constantly worked for submissions after securing takedowns while Mairbek Taisumov struggled to get back to his feet so he could strike. We saw Prazeres work for a North/South Choke, Kimura and Armbar all within the first five minutes. When he was not working for a submission, he was transitioning and landing decent blows.