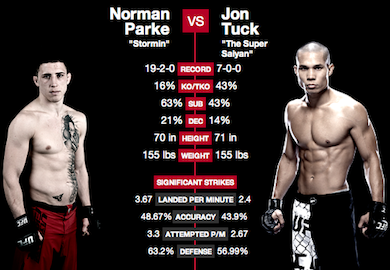 This was a fast paced fight with a lot of crisp striking and impressive counter-shots.

The bout opened up with an extremely close round where no fighter had the upperhand. Tuck landed impressive shots, but repeatedly got popped with Parke’s counter lefts. Parke shot for a takedown with ten seconds left in the round and secured it; it was a move that awarded him a close round.

The second round was nowhere near as close as the first. Tuck showed fatigue as soon as the round started. With his mouth wide open, he threw weak punches to try and keep Parke at bay. Parke would have none of that, however, and proceeded to pick apart his opponent with beautiful combinations.

The punishment continued in the third round. Tuck gave up throwing combinations and simply threw one-off punches that barely connected. Parke continued chop Tuck down in various ways including punches to the thigh of Tuck. The only big breaths that Parke took seemed to be controlled big breaths to regulate his patterned breathing; he was in great shape.

After a competitive first round, Norman Parke controlled the fight by dictating where the action and continuously pushing the pace.