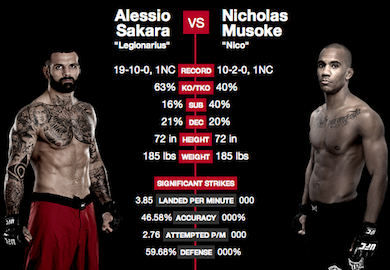 These two warriors swung for the fences from the get-go and both men were in danger of losing the fight early on.

Alessio Sakara wobbled Nicholas Musoke within the opening seconds of the fight after connecting with some powerful shots. Musoke was wobbled and eventually taken down, but he made it back to his feet and answered with some offense of his own.

Within seconds of getting back to his feet and gaining composure, Musoke cracked Sakara and pressed the action against the fence where he eventually ended up on top of his opponent, securing a takedown. After a failed submission attempt from Sakara, Musoke found himself in side control looking to transition. Sakara exploded out the bottom at just the perfect time and found himself on top of Musoke, throwing bombs.

Musoke was cool, calm and collected while on his back and waited for an opportunity to present itself. He caught one of Sakara’s strikes and turned it into an armbar, forcing Sakara to verbally submit.

This was Nicholas Musoke’s octagon debut.

Nicholas Musoke defeated Alessio Sakara by way of Verbal Submission (Armbar) 3:07 of Round 1