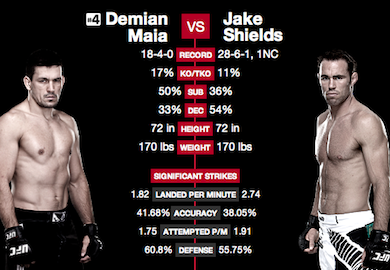 The fight went a full five rounds and was a reminder of how elite Shields’ grappling skills are.

Maia secured two takedowns early on in the first round, but nothing came of the advantageous positions. Shields took the top position mid-way through the round and that’s what won him the first. After getting shut down transition after transition attempt, he took to striking and potentially stole the round with repetitive strikes to the head and body of Maia.

The fight quickly returned to the ground in the second round and Shields utilized short elbows and punches to wear down Maia. Shields was working, but wasn’t giving Maia the opportunity to sweep him or stand up. Shields was on top of Maia for close to four minutes and there’s no question that the grinding offense tired Maia out.

Maia seemed to be gaining momentum early on in the third round after landing a few nice shots and a takedown. He had Jake Shields’ back and was looking to get a hook in, but Shields rolled through and impressively landed on top; it was a beautiful thing. From there, Shields went to his bread and butter and continued to spend the rest of the round on top of Maia, working just enough to not get stood up.

The fourth saw Maia on top of Shields for the first time in a while, but he was inactive on top and the referee was forced to stand them up. Maia would continue to gain momentum in the fifth where he stuffed multiple takedowns and got the better of the exchanges while standing, but it was too late for Maia to win by decision. He had to finish the fight to walk out with his hands raised, but he was too exhausted.