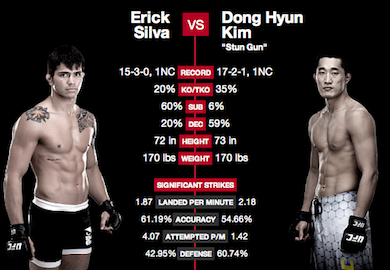 The fight opened up with a very close opening round. Silva got the better of Kim while standing, but Kim took control of the fight once it went to the ground. While in the clinch, Kim ate a number of gruesome knees to the body that would go on to effect his conditioning later on in the fight.

Kim would persevere through all the punishment to his body, however, as he went on to brutally knockout Erick Silva with a devastating left hook. He followed up with an unnecessary hammer fist, but it was all instinct. Silva was out cold and looking up at the lights before he even hit the canvas.

Depending on how the main-event goes, this should easily be rewarded Knockout of the Night.