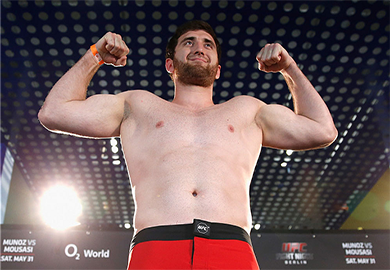 We kicked off this stacked Saturday of fights with a heavyweight affair between Viktor Pesta and Ruslan Magomedov.

It seemed like it was all over in the first round when Viktor Pesta drove his knee into the ribs of Ruslan Magomedov. Magomedov fell to the ground and Pesta went in for the kill, but he simply could not get the job done. Pesta tired himself out going for the kill in round one and the body-shot took a lot of wind out of the sails of Magomedov. The remainder of the fight was slower paced, but they still got some big shots in.

Pesta did very little throughout the rest of the fight to get the judges on his side. Magomedov stayed busy enough to land big shots and win the second and third rounds.

The heavyweight division’s future looks bright with exciting strikers like these making their way into the promotion. The fight was well received by the live audience.