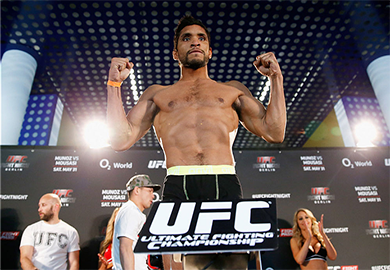 Maximo Blanco may fight with an orthodox stance, but his approach on fighting is rather unorthodox itself. As they met in the middle of the octagon in the first round to touch gloves, Blanco ignored Ogle’s attempt of high-fiving and executed a jumping front kick. The live-crowd saw this and voiced their disapproval of what they thought was a dirty tactic by Blanco. Lucky for Ogle, the kick JUST glanced his head but it set a weird pace for the rest of the first round. Ogle eventually made it back to his feet and even landed a solid takedown.

Andy Ogle came back and dominated the second round with controlling every aspect of the grappling game. Blanco’s flurry at the beginning of the bout may have won him the first round, but he tired himself out by going for the finish and trying to grapple with Ogle was not helping at all.

The third and final round was more of a boxing contest than anything. Even though Blanco was tired, he was still able to land more significant shots than Andy Ogle. Ogle was walking toward Blanco with his hands held high, but his head movement was almost non existent and it made it easy for him to get repeatedly popped.

Maximo Blanco won the first and third rounds and was rewarded with a unanimous decision victory by the judges.