‘UFC Berlin’ Results: Alcantara TKOs Lee in 25 Seconds of Round 1 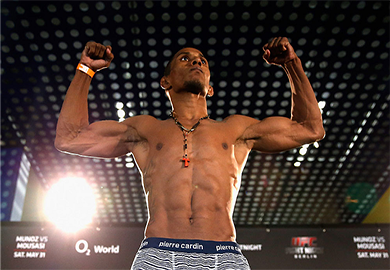 Iuri Alcantara only needed twenty-five seconds to finish Vaughan Lee today. The technical knockout was the first of the day and it brought the crowd to life after three consecutive decisions.

Lee wanted to kickstart the action early on so he lunged forward with a teep-kick to the body of Alcantara and tried to follow it up with a straight right. He missed his punch which allowed Alcantara to counter with a HUGE overhand right that sent Lee crashing to the canvas. He tried to recover but Alcantara jumped on him quickly and landed some more shots that forced the referee to call an end to it in less than a minute.

Iuri Alcantara has now won two fights in a row and he stated he is making a run for the title after his win tonight.

Iuri Alcantara def. Vaughan Lee by way of TKO (Punches) :25 of Round 1