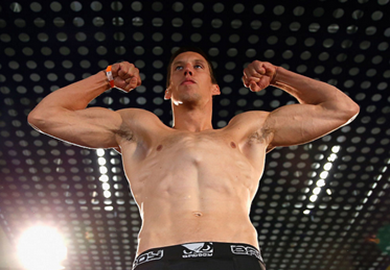 The majority of the bout was a back-and-forth grappling contest that saw both Jotko and Cedenblad get advantageous positioning. Jotko was a more aggressive with his striking, but his punches were so wild that he found little success with them.

Toward the end of the second round, Cedenblad was postured over Jotko who was trying to get back to his feet. Cedenblad cut him off with a hard uppercut and proceeded to jump on his neck for a guillotine. Jotko was trapped, but with only ten seconds left of the bout it seemed he was going to be saved by the bell. Cedenblad would have none of that, though and he wanted to guarantee himself a victory. He cranked on the hold and Jotko was forced to submit with one second remaining in the round!

Cedenblad jumped to his feet and celebrated while Jotko struggled to get to his knees. It was likely that if the hold had been released at the end of the round, he would have been out cold.

Magnus Cedenblad def. Krzysztof Jotko by way of Submission (Guillotine) 4:59 of Round 2