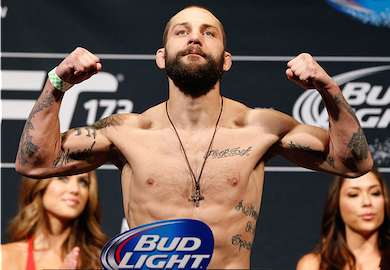 Aaron Phillips caught Sam Sicilia off guard a few times by switching levels, attacking the head and body evenly. Sicilia was dropped by a knee to the body and almost walked into a guillotine, but he escaped with ease and worked some ground and pound.

The beginning of the second round hit the ground quickly at Phillips was tagged with a punch that sent him tumbling to the ground. Sicilia followed him and tried to rain down some powerful shots, but Phillips recovered quickly and worked for submissions off his back. An errant armbar attempt from Phillips actually benefited him because it caused a scramble that led to Sicilia being on his back. From there, they switched advantageous positions but neither man could capitalize and finish the bout.

Sam Sicilia had nearly four minutes of top position time in the third round. He stayed just busy enough for the referee to refrain from resetting the action and standing them up. The top control for Sicilia likely gave him the third round in the eyes of the judges, and it could have been the round that won him the fight.