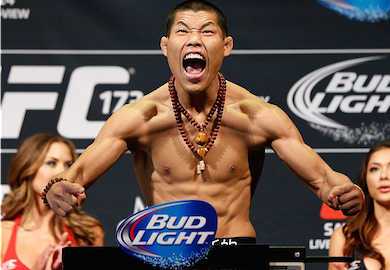 Jingliang Li and David Michaud made their UFC debuts tonight and kicked off the fights on the UFC Fight Pass portion of ‘UFC 173’. Michaud was undefeated walking into the octagon, but he walked out tasting defeat for the first time in his career.

Jingliang Li and David Michaud put on an impressive performance, all things considered. Michaud was instructed by his corner to try and take the fight to the ground rather than duke it out. Michaud disobeyed his corner in rounds one and two and suffered for it. Other than a big slam, Michaud did not rack up much offense in the first ten minutes. Li landed huge shots and when he was taken down, he would sweep Michaud and end up on top where the round would end.

Both fighters approached the third and final round as if they had one round a piece. Michaud landed a takedown but Li turned the tables and got on top of him. Li was raining down punches and elbows but Michaud showed how tough he was by eating them and working for submissions. He got back to his feet only to try and lock Li in a guillotine attempt. Michaud did not have his guard locked in so Li easily transitioned to side control where the final horn sounded.

It could have easily gone either way, but it was Li who had his hand raised at the end of the bout.