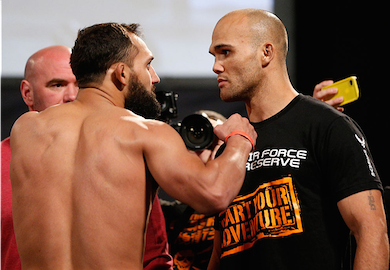 ‘UFC 171: Hendricks vs. Lawler’ goes down tonight from the American Airlines Center in Dallas, Texas.

In this thread we will be covering the five-fight pay-per-view card. (For Our prelims play-by-play and results click HERE.)

ROUND 2- Shields throwing out the jab. Lombard just stalking Shields. they clinch, Lombard gets another trip takedown. Lombard is in half guard. Now he is full guard. Lombard not doing a lot from the top. Shields tries for a guillotine, doesn’t get it. Referee stands them up. Both fighters being extremely patient. Lombard is just siting back, waiting.  Shields shoots in, Lombard sprawls. Lombard stands up, lets Shields up. Shields throws a body kick. Lombard hasn’t done anything in a while. They tie up, Lombard again gets the trip. He is in full guard. Lombard 10-9.

ROUND 1 – Sanchez goes for a spinning kick, misses. Jury catches Sanchez with a right hand. Sanchez says bring it. Leg kick from Jury. Jury with a body kick. Sanchez gets Jury against the cage. Sanchez lands some knees to the thighs. Fighters get off the cage. Sanchez with a body kick. Sanchez comes in with a flurry, Jury does a good job avoiding it. Jury lands a good right hand. Jury lands a head kick. Jury goes for a takedown and gets it. Sanchez looks for a leg lock. Jury gets out and gets Sanchez’s back. Sanchez stands up and tries a switch. Close round, Jury 10-9.

ROUND 3- Jury throwing out the jab. Jury is keeping the jab in the face of Sanchez. Sanchez rushes in with punches, Jury moves out of the way. Sanchez misses on a superman punch. Body kick from Sanchez. Head kick from Jury, is blocked. Another body kick from Sanchez. Leg kick misses from Sanchez. Jury has Sanchez against the cage. They break away. Jury with a flying knee, misses. Jury goes low and gets a takedown. Jury is in full guard. Sanchez tries for an armbar, Jury pulls out. Sanchez pulls guard and locks up a guillotine in the last seconds. Jury 10-9.

ROUND 1 – Condit misses with a leg kick. Woodley lands a big right hand. Then another. They clinch, Condit backs out. Condit throws a spinning kick, Woodley pushes Condit against the cage. Woodley lands a close elbow. Condit reverses and has Woodley against the cage. Woodley reverses has Condit on the cage. They break away. Condit with a straight front kick. Woodley gets tagged with a right hand. Condit comes in for a combo, Woodley gets the takedown. Woodley in full guard. Condit locks up triangle. Woodley picks him up and throws him off. Both fighters are standing up. Woodley shoots and gets the takedown. Both fighters get to their feet. Condit throws a head kick to end the round. Woodley 10-9

ROUND 2- Condit with a leg kick. Condit throws a head kick, blocked. Woodley shoots and gets the takedown. Woodley is in full guard. Condit is staying busy from the bottom. Referee stands them up. Woodley throws a leg kick, Condit immediately falls to the ground in pain. The fight is stopped. It appears that Condit injured his knee earlier in the fight, his opposite knee gave out when he was kicked.