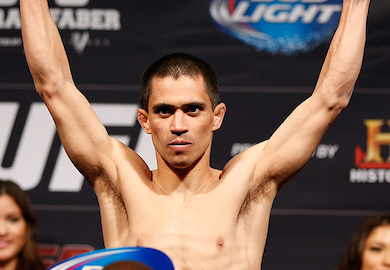 Danny Martinez has not lost a fight since 2010 and was looking to make a successful UFC debut tonight. His opponent, Chris Cariaso, would be the perfect test as he is a eight-fight UFC veteran.

Martinez was looking to cut the energy of Cariaso in half early on by pressing him against the cage and constantly working for a takedown, but Cariaso eventually separated and made it back to the center of the octagon to land some shots. Cariaso found no success in that and was slammed down at the close of round one.

Cariaso is a scrappy fighter who moves around the octagon a lot, and Martinez studied well. He looked to cut the energy of Cariaso in half throughout the fight by pressing him against the octagon, looking for a takedown. Cariaso would constantly separate and reset the action in the middle of the octagon but he would only get taken down.

They both landed some decent shots throughout the fight but they were never knockout-worthy punches. Martinez did a great job at changing levels with his combinations and that forced Cariaso to back up against the fence repeatedly, which put Martinez right back in position to grind the energy out of his opponent. Cariaso landed more impressive combinations in the middle of the octagon and etched out a close decision win.

Danny Martinez may not have put on an exciting performance in his first octagon outing, but his opponent did not perform well either.