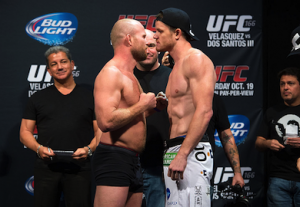 If you can’t make BJPENN.COM’s Live broadcast of the prelims, or missed the preliminary Fox Sports 1 airing, than tune in here for all the blow-by-blow and round-by-round action you can handle!

Round 1 – The gloves touch and we are underway tonight! Thank you for joining us; let’s get to the action. Pague is taking the center of the octagon and gets a clinch on Horiguchi and wraps his legs around him. Pague has Horiguchi’s back. Horiguchi stand sup and Pague goes for the rear naked choke. The forearm is under Horiguchi’s neck, but Pague’s back is against the cage and he cannot really crank right now. Horiguchi is helping himself by grabbing Pague’s left arm. Horiguchi is getting tired out by carrying Pague’s body weight. Pague lets go and is standing behind Horiguchi’s back. With 1:30 remaining, Horiguchi has fully escaped and is now putting the pressure on Pague. Pague connects with a knee but answers with a hook. Pague slams Horiguchi down to the mat. End of the round. 10-9 Pague.

Round 2 – The round opens with a nice inside leg kick and hook from Horiguchi, then Horiguchi drops Pague with a HUGE left hook. Pague is in trouble. Horiguchi jumps on him and throws some bombs, but Pague is hanging on. Pague sweeps and Horiguchi is now on bottom. Horiguchi makes it back up and takes Pague back down. He pins down Pague’s arm with his knee and makes him eat some soft shots. Horiguchi postures up and lands three big shots. This is looking to be Horiguchi’s round and if Pague’s conditioning is as bad as it looks, it could be Horiguchi’s round. Horiguchi postures back up and is throwing bomb after bomb and it looks like Pague is done; he’s covering up but not moving around. The referee stops it! Horiguchi makes a successful UFC debut.

Kyogi Horiguchi defeated Dustin Pague by way of TKO (Strikes) 3:51 of Round 2

Round 1 – Fili is very aggressive in his stand up right off the bat. Fili connects with a big right hand and Larsen answers right back. Larsen’s takedown attempt gets stuffed. Fili connects with a big knee and Larsen is in trouble; he’s cut open on the forehead. Fili is connecting with hard shots but Larsen is moving around and looking alive so the fight will go on. Larsen is looking to get this fight to the ground. They pause the fight to check Larsen’s cut and here come the crowd’s boos. The fight will go on. Larsen connects with a right and Fili answers with one himself. Fili’s style is crisp and technical. It’s looking good. Larsen catches a kick and drags Fili down with 1.5 minutes left in the round. Larsen has been on top for around 25 seconds and hasn’t attempted to pass. Fili, however, is working for submissions and sweeps. They’re back to their feet after a scramble and nothing really happens until the end of the round. 10-9 Fili.

Round 2 – Larsen is a victim of two cuts and the doctor is telling him he’s going to keep a close eye on it. Fili catches a leg kick and throws a left and right hook. Larsen eats another big right. Fili barely misses with a leg kick. Larsen hits a jab. Larsen eats a body shot then a big right hand and he’s wobbling. Fili pushes the pace and goes in for the kill. The referee stops the fight. Fili takes the fight on 10 days notice and wins.

Andre Fili defeated Jeremy Larsen by way of TKO (Strikes) :53 of Round 2

Round 1 – Let’s hope this fight is just as good as the first two. Rio goes for a lunging jab, trying to setup the takedown but Ferguson isn’t phased. Rio goes for another takedown but Ferguson stuffs him. They reset in the middle of the octagon. Ferguson lands a good combo and Rio’s nose is bleeding. Another good sprawl from Ferguson. Knee to the shoulder from Ferguson. He could set up a choke from here but Rio is clutching at it. Ferguson catches Rio with a left hook and Rio is wobbly! Rio falls, Ferguson dives on him, rolls over onto his back and locks in a D’arce choke and it’s in deep. Rio submits and it’s game over, folks!

Tony Ferguson defeated Mike Rio by way of Submission (D’Arce Choke) 1:52 of Round 1

Round 1 – Aside from a few Amagov shot attempts, nothing really happens in the opening minute. Waldburger shoots and Amagov sprawls. Amagov catches Waldburger with a spinning back kick to the gut and it’s a rough one. Waldburger is looking to take this fight to the ground; he has Amagov pressed against the cage. Amagov has good balance which is helping his takedown defense. Amagov is catching Waldburger with short lefts that sound like they hurt. Amagov rocks with a left hook Waldburger and he’s down. Amagov stands over Waldburger and proceeds to connect with multiple shots until Waldburger is out cold.

Adlan Amagov defeated TJ Waldburger by way of Knockout (Punches) 3:45 of Round 1

Round 1 – Sotiropoulos is hopping away from Noons a lot, avoiding all strikes. It’s been an entire minute and we don’t have a strike landed yet. Another 30 seconds and nothing. Noons keeps landing jabs to the stomach but they’re not really doing anything. Two minutes and nothing significant. Sotiropoulos finally lands a clean right hand but doesn’t follow up with anything. Noons hits a nice left to the head of Sotiropoulos. Sotiropoulos blocks a hard left hook. Sotiropoulos misses a left hook. This is a slow paced fight and the crowd is growing restless. Noons gets poked in the eye and is wincing badly. Noons says he sees black, but he can keep fighting. Tough trooper. Noons hits an uppercut a few seconds after the fight resumes. Noons knocks Sotiropoulos down with ten seconds left, but Sotiropoulos gets right back up. Noons throws a lot of punches and wins round. 10-9 Noons.

Round 1 – They’re both very active at the start of the round. They’re both checking leg kicks very well. Kaufman seems to be the aggressor here. Eye clinches Kaufman and she has her pressed against the cage. Kaufman is taking the center of the octagon. Eye presses forward and has Kaufman pressed against the cage again. Kaufman escapes and is back in the center of the octagon. Eye goes for a clinch and they both land a knee to the gut. Eye presses Kaufman against the fence again, but this time quickly pushes off and lands an elbow and a punch to the face. Kaufman connects with a lunging right hook. Kaufman with another right hand. They’re pretty much even with strikes connected but I’d give the significant strike advantage to eye. Horn sounds. 10-9 Eye

Round 2 – Kaufman connects with a left straight as Eye connects with a jab of her own. They clinch and Kaufman lands two knees, one of which lifted Eye off the mat. Eye gets tagged with a couple wild hooks. We are seeing a better pace from Kaufman. Jessica Eye lands a hard jab and a left hook— a couple of punches she keeps connecting with. Kaufman’s left eye is swelling up. Kaufman is pressed against the fence and is getting her foot repeatedly stepped on. They separate but Kaufman pushes Eye against the fence, now. They exchange a short flurry of punches. Kaufman connects with a leg kick. Horn sounds. Very close round with not much happening. 10-9 Kaufman.

Round 3 – Eye tries for a leg kick but Kaufman connects with a right hand over the top. Eye stutter steps, but is OK. Kaufman clinches, presses Eye against the cage and they’re both connecting with knees to the body and thighs. Eye separates and they’re back in the center. In the clinch, Eye gets popped with a right hand. Eye swats away two shots. Kaufman is clearly the aggressor and while nothing fight-threatening is being thrown, her octagon control will give her enough of a nod to take the fight if it goes to decision. Eye really faded after the first round. Eye eats a left straight and she’s hurt. Kaufman smells blood and is connecting with multiple shots. Kaufman pulls her close and lands a knee to the body but Eye turns it around and pushes her against the cage. Kaufman is throwing multiple pitter-patter punches to just get her numbers for her Fight Metric. Kaufman connects with another series of brutal strikes, but Eye connects with a shot to Kaufman’s swollen eye. 10 seconds left and Kaufman pops Eye with two left hooks in the clinch. Very exciting ending. 10-9 Kaufman.

Hector Lombard defeated Nate Marquardt by way of TKO (Punches) 1:48 of Round 1

Round 1 – Boetsch goes lunging forward with a hook but CB brushes it off and dodges it. Boetsch connects with a left. CB goes for a leg kick but Boetsch catches it and lands a brutal leg kick and body shot. CB looks to utilize angles, but Boetsch keeps cutting him off. CB hits two solid leg kicks. Boetsch is controlling the middle of the octagon. Boetsch eats a left jab. CB throws his hands up and tries to invite Boetsch to strike him much to the dismay of the fans. Boetsch secures a takedown but CB is right back up. Boetsch lands a hard leg kick. CB whiffs on a high kick. CB hits a left hook. CB lands a couple nice knees in the clinch. CB is confident with his striking and connects with a couple solid hooks; Boetsch is looking discouraged. Boetsch whiffs on a hook, then lands a short uppercut while close to CB. CB lands a good head kick. Horn sounds. 10-9 Dollaway

Round 2 – Boetsch connects with a right but CB secures a takedown. CB is now on top and is trying to transition. CB has side control and almost locked in a peruvian necktie, but Boetsch is back to his feet and lands a couple big shots before being taken down again. Boetsch is back up and almost lands a guillotine, but CB is quick to recognize his bad positioning and stands back up. Boetsch has CB pressed against the cage and they make it back to the middle. CB takes him down again and Boetsch locks an arm and almost has a straight armbar/kimura. He keeps the arm and CB feels like he isn’t in trouble. They remain in this position until the end of the round. 10-9 Boetsch.

Round 3 – Boetsch lands a leg kick. CB pokes Boetsch badly in the eye. The doctor makes his way into the octagon. Boetsch is going to continue. Boetsch is moving fast and is fighting aggressively now. CB shoots for a takedown and Boetsch blocks it. Boetsch has CB pressed against the cage and connects with a couple uppercuts before CB makes his way back to the middle. CB pokes Boetsch in the eye again. Fight is paused. CB has a point taken away; that means a lot in this fight. Boetsch slams CB with a hook but CB takes him right back down after a failed guillotine attempt from Boetsch. CB is on top and is trying to transition but Boetsch is preventing it from happening. Just as I type this, he makes it to full mount with 2 minutes left. Boetsch pushes off the cage and makes it back to his feet. Boetsch has CB pressed against the cage. CB lands a knee to the body. Boetsch lands a leg kick. Boetsch lands a big overhand right! CB is backing up but he has his composure. They’re both getting really sloppy. CB trips Boetsch but Boetsch spins through and is on top of CB! CB is in a choke but it’s not going to lead to anything. Exciting fight. 10-9 Boetsch.