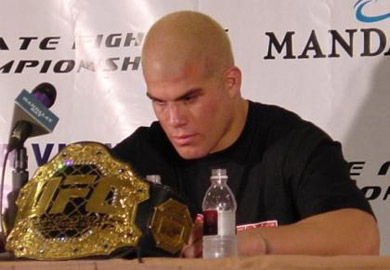 After a fifteen year career, Tito Ortiz is ready to hang up his gloves and call it a day. The former UFC Light Heavyweight Champion will be walking into the octagon for the last time against Forrest Griffin at UFC 148 on July 7, 2012 in Las Vegas, Nevada at the MGM Grand Garden Arena.

“The People’s Champion” will be returning to Nevada which is the home of his last UFC victory where he submitted Ryan Bader at UFC 132. Ortiz claims to be fully prepared for his third fight with Forrest Griffin and sounds like he is ready to leave it all in the cage that night. During the UFC 148 press conference call, Ortiz explained what it meant to him to have this final stand next Saturday.

“I’ve been waiting 15 years for this, for 15 minutes. Only 15 minutes of my life I’ll have to give. Over the last eight weeks, I’ve been giving that 15 minutes, three hours, four hours, five hours a day, six days a week, preparing for Forrest. I know how he fights and I know how he likes to fight. I’m gonna try and absorb as much as I can for the next week, like I’ve been doing the last eight weeks, continuing on with the winning mentality. This fight means the world to me and I’ll show on July 7 how much it means to me. I’m not coming to play around, to talk a lot of smack, I’m coming to fight. I know Forrest is ready, I’m ready, let’s fight.”

Tito Ortiz and Forrest Griffin are far from strangers. The two met twice before, each picking up a win over the other.

Six years ago at UFC 59, Tito Ortiz and Forrest Griffin first met in the octagon. Despite riding a three fight win streak, Forrest Griffin was still the biggest underdog on the card at +300. It was his first time testing the deep end of competition of the UFC and it was either sink or swim. Griffin put on a brilliant performance for such a heavy underdog and barely lost the fight by split decision. He beat adversity in the first round and came back to, even dishing out some impressive strikes of his own in the second and third rounds. Nonetheless, Tito Ortiz still walked out as the victor.

The two headlined UFC 106 in 2009 and put on another exciting matchup. This time around, the tables were turned in the eyes of the bookies. By this time, Forrest Griffin was a former champion and established himself as an elite fighter in the UFC. Ortiz hadn’t had his hand raised since 2006 where he beat Ken Shamrock. Despite riding a slump, Ortiz still put on a good showing and proved that he could hang in there with the best. Unfortunately for Ortiz, “hanging in there” was not enough. Griffin won the bout by way of split decision.

This article appeared first on BJPENN.COM
Previous articleGSP: I'll Be The David Beckham Of MMA | MMA News
Next articleWanderlei Silva: Holding On To His Pride
© Newspaper WordPress Theme by TagDiv