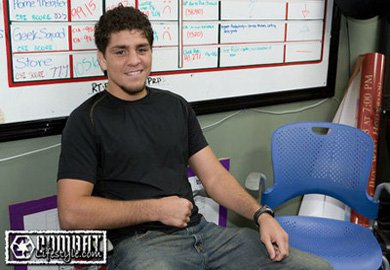 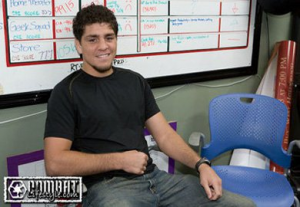 UFC president Dana White recently talked about a failed attempt at getting welterweight, Nick Diaz, back into the cage. White said that he contacted Diaz and offered him a fight with Hector Lombard, but Diaz did not respond saying if he accepted it or not.

The elder Diaz brother then gave his side of the story to MMAFighting, confirming that he was contacted and gave his reasons for not responding.

“I never considered anything other than to renegotiate my contract or fight (champion) Johny Hendricks,” he said. “All I said was, What am I getting paid? And he said, Let me check your contract. And the last text I got from him was what I would be fighting for. I didn’t consider fighting for that kind of money. I didn’t say anything back to him, right, but usually that means something. I’m not considering even for a second fighting any of those guys for less than $500,000. There’s no way.”

Diaz also said he would come back if he was given an immediate shot at the title.

Is Nick Diaz worth $500K? This writer says absolutely and here’s why.

The fans want to see Nick Diaz fight, it’s as simple as that. The thing with the Diaz brothers is you either really love them or you really hate them. There is no in between with these guys. Fans will pay to watch him win and they will pay to watch him lose. In the business of hyping up fights, is there anyone better? I mean look, the guy isn’t even fighting right now and we all still can’t get enough of what he says. The UFC is a business and businesses have to make money. That’s why they’re still trying to get him to fight, because they know he will make them money. Nick Diaz puts butts in seats. He sells tickets and PPV buys. Someone please name the last Nick Diaz fight that you weren’t excited to see. The guy’s a fighter and that’s what the overall UFC audience wants to see, someone who is capable and will go in there and put on a show.

Do you know when the last time Nick Diaz was finished in a fight was? Yeah I couldn’t remember either. Diaz’s last loss that wasn’t a decision or stopped due to a cut was in 2002. That was to Jeremy Jackson, who Diaz beat via TKO four fights later. Diaz is 26-9 with 1 no contest. From 2008-2011 Diaz went on an 11 fight win streak. During that streak Diaz won the Strikeforce welterweight title and defended it 3 times. More recently, he defeated BJ Penn in 2011 and went on to fight for the welterweight title in his next two fights (one was for the interim title). Diaz lost both of those fights by decision. Who did he lose to? Oh it was just Carlos Condit, who is currently ranked as the 3rd best welterweight in the UFC rankings. Then there was Georges St-Pierre who has been considered one of the p4p best for how long? That’s a record that deserves to get acknowledged and that the UFC should pay for.

The Division Needs Him

I’ve discussed how much the fans want to see him fight and how that is a big reason the UFC needs to pay up, which in turn would bring in money for them. Now let’s talk about how much the welterweight division needs him. I am in no way saying that the UFC’s 170 pound division doesn’t have star power, but it is obvious that the division is missing something after the departure of long time king, GSP. Current champion, Johny Hendricks, is a hell of a fighter and has the skills to beat anyone, but that’s not what I’m talking about. The fighters that fans pay to see are one of two things. They’re either the hero or they’re the villain. Hendricks comes off as sort of an in between character. Will he shift to a more superstar role if he continues to defend his belt? Maybe. But at this moment, right now, the UFC needs someone like Nick Diaz and let’s be honest, there’s no one else like Nick Diaz.

Let me know if you guys agree. Should the UFC sign the check and get Nick Diaz in the octagon again?