SMH! With one submission win, Reebok lists this as Conor McGregor’s fighting style

Today is a big day in the news for Reebok’s MMA campaign. Some say that there is no such thing as bad publicity. If so, Reebok is doing a hell of a good job, messing up.

The latest find in the world or Reebok’s MMA defects may come to upset even more Irish fans. A t-shirt featuring UFC interim featherweight champion Conor McGregor details the fighter’s bio, similar to Machida’s. McGregor who is more known for his stand-up prowess and spectacular knockouts has his fighting style listed in the Reebok design as “BRASILIAN JIU JITSU.” 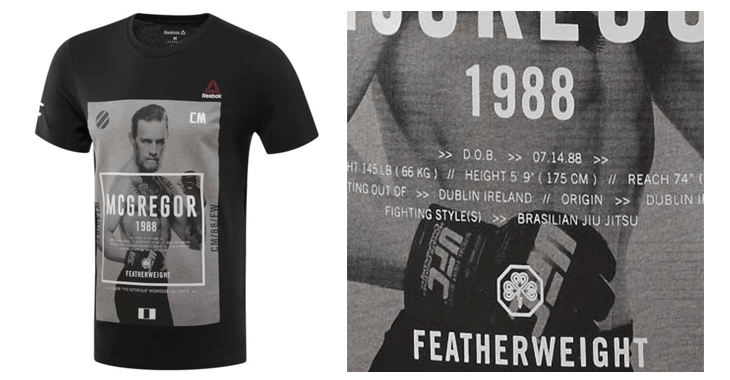 With one submission win in his professional career, we think “The Notorious” himself would rather be known for his highlight stand-up skills.

This article appeared first on BJPENN.COM
Previous articleBethe Correia Responds to Miesha Tate: “I’ll make your wish come true”
Next articleWATCH! Jose Aldo on the most personal fight of his career: ‘we’ll see who we really are’
© Newspaper WordPress Theme by TagDiv