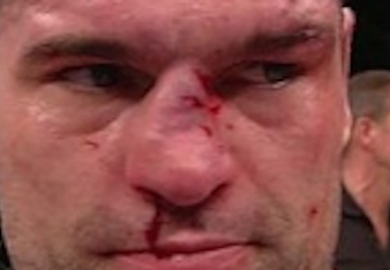 After opening up last night’s main event with two dominant rounds against Dan Henderson, ‘Shogun’ Rua, suffered one of the most brutal losses in his career when an ‘H-Bomb’ landed on his face in the third.

The result? A broken nose (Pictured) and another defeat on his record.

In a recent report coming out of FOX, the former UFC light-heavyweight champion, will undergo surgery this week to repair the nose and outside of this one injury, is completely healthy.