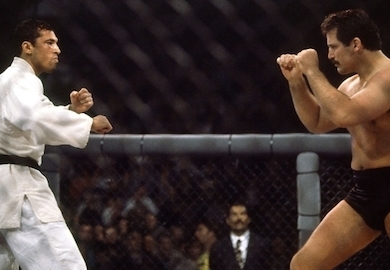 “When I tell people I was more torn with my conscience then ever with an opponent, most people will probably never understand that,” said the former pro wrestler. “You know, during the course of that match I’m actually looking at – I’m a big believer that the eyes are a windows into a person’s soul – I’m staring right through his soul and he’s looking over at his Dad outside the cage wall there, and I could read exactly what’s going through his mind. He’s saying ‘Dad I’m hanging in here, but if you were to throw in that towel I wouldn’t hold it against you’, and then I went from Royce’s eyes, I looked over to Helio outside the cage wall, Helio is looking at me, he’s got the towel in his hands, he brings the towel up, crosses his arms and then just shakes his head ‘no’. And I’m thinking to myself, you old bastard, you’d let me kill your kid out here for Gracie Jiu Jitsu wouldn’t ya? Well nobody knows that Dan Severn is out here tonight, so I’ll just simply say, did I tap out because someone beat me, or did I tap out because I refused to do what I had to do to another human being? I’m the only person that can answer that question. All I’ll simply say is, from UFC number 4 to UFC number 5, I took 32 days out of my life and I trained to become a No Holds Barred fighter, and I destroyed the field.”

Prior to the modern era, ZUFFA owned, UFC we have come to love today, there was a whole different animal of a sporting event.

In the early days, a super-fight got no bigger than UFC 4’s featured bout between Dan Severn and Royce Gracie.