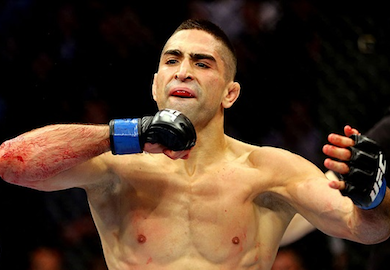 Lentz took a shot at Lamas’ performance this past Saturday against Hacran Dias, saying he would beat Lamas easy. “The Bully” didn’t take too kindly to that, and fired back by saying:

“First of all, this kid doesn’t even have heart,” he said. “I’ve heard stories about this guy; my boy Luis Palomino, ‘Baboon,’ was down at (American Top Team) for a while, sparred with Nik one time, messed him up, and then Nik wanted to duck him for the rest of the sparring sessions he was there. They would not let ‘Baboon’ spar with him. To me, that shows no heart.

“When I go up against somebody and they give me a licking in a sparring session, you bet your ass I’m coming after you the next time. There’s no way you’re not going to let me spar you again, because I’m going to come after you until I get you. That just shows if you have heart or not, and this kid has no heart.

“He goes on Twitter saying, ‘I (would) beat Ricardo Lamas or Cub Swanson easy. Easy money.’ I know he’s popping his mouth off to get a better fight, but there’s no need for that.”

Neither fighter currently has a fight scheduled, but with Lamas’ broken thumb, it may be a while before we get to see this one resolved in the cage.