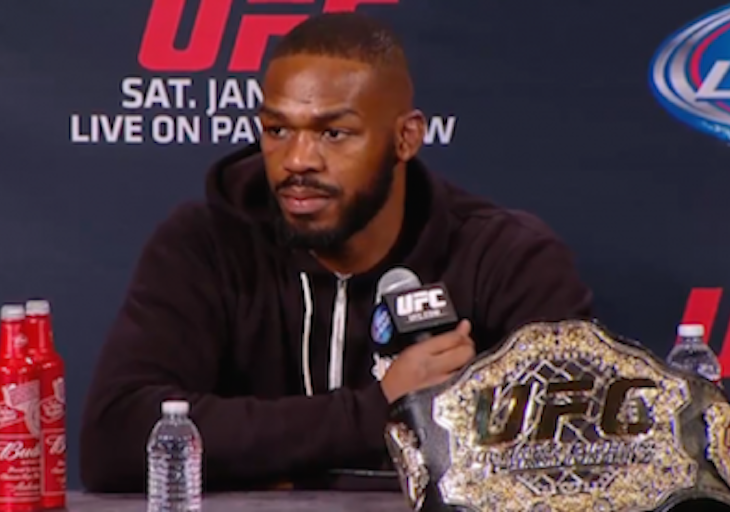 Recently it was revealed that Jon Jones tested positive for Benzoylecgonine, the main metabolite in cocaine, in a pre-fight drug test.

Following the announcement, many UFC fighters, fans, former fighters, and celebrities, began to give their thoughts on the situation.

Randy Couture offered his thoughts on the situation in an interview with Submission Radio:

“Well it certainly raises some questions. I’m very familiar with drug testing protocol, coming out of the Olympic wrestling that I was akin to, and you have and out of competition substance list, and the in competition substance list is considerably different. I see now that there was a second test done pre-competition that came up negative. That was in the newspaper today so I’m not sure how accurate that is, but it certainly raises a question. If that second test is true, then I think the commission was doing what they needed to do to make sure that going into that fight on fight night he was clean and didn’t put himself or Daniel Cormier in any danger. If that second test never happened, then it raises the question of what the athletic commission was thinking in allowing a guy that’s just failed a drug test to continue to compete, and no public statement was made about that failed test. But I understand the difference between an in-competition fight night drug test, and it’ll be interesting to see what those test results were when they come back from Jon’s fight night test, verses the one he did on December 3rd that was an out of competition test. Obviously still people want to understand that line. ‘In-competition’ is the night of the fight. Anything in training camp or before that, or the random tests that happen throughout the year, those are out of competition. Yes he’s in training camp for that fight, but it’s still considered out of competition when he’s not competing until fight night. So there’s a very fine line there, and those lists vary in what are banned substances and what are not. Regardless, cocaine is an illegal substance whether it’s performance enhancing or not. So it raises a whole bunch of other questions about Jon and obviously he’s volunteered to put himself in to rehab, which is good for him. I hope that goes well. It’s a shame that the reputation and the ability that he brings to the cage is a little bit tarnished now because of this, but it is what it is. He’s the one who has to look himself in the mirror and deal with that. It will be interesting to see what his fight night drug test comes back and if it comes back clean. If it doesn’t come back clean, then obviously the commission will have no choice but to peruse sanctions against him. Will they go easy on him because he’s subjected himself to rehab? That’s a question we’ll see I guess when the results come back.”

Given that the NSAC hasn’t listed Benzoylecgonine as a banned substance in out-of-competition drug testing, Jones likely won’t be suspended, and his win over Daniel Cormier won’t be overturned.

“Well obviously whether or not it’s performance enhancing is another definition and thing that needs to be understood. But let’s make it clear, we’re in a combative sport where pain and getting hit, and all those certain things, and being able to endure those better are a factor in fights. That’s why it is a banned substance on fight night. ‘Cause if he’s numbed and in a different state of mind from cocaine to handle the pain and everything we go through as fighters, then he’s enhancing his performance. Now is that the case and is that what was going on during training camp? Did he have, you know issues, injuries, and things that were going on that he was trying to alleviate some of that pain and endure that to get through camp? I don’t know those answers. But that’s the kind of the distinguishing thing between in-competition and out of competition, and what you can do in your training and in your regular life, verses what you can do on fight night. And so in some ways cocaine and those types of drugs that have that numbing effect are banned in competition.”

This article appeared first on BJPENN.COM
Previous articleLorenzo Fertitta Explains Why The UFC Booked Fight Night Boston On A Sunday
Next articleRobbie Lawler vs. Nick Diaz 2? Dana White would ‘love to see it’
© Newspaper WordPress Theme by TagDiv