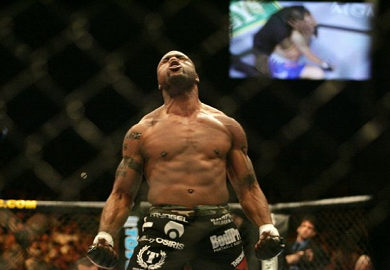 Rampage Jackson says he has a new reason for leaving the UFC after his upcoming fight against Glover Teixeira at UFC on Fox 6 in Chicago.

Rampage says that UFC refuses to let him wear Reebok apparel in the Octagon, after recently inking a deal with Reebok, Rampage wants to represent his new sponsor during his fights.

“My reasons for wanting to leave the UFC is still the same. Matchmaking is just one of the reasons. It’s nothing about money. I’ve done this interview several times before and don’t want to go into it. I have a new reason. I’m sponsored by Reebok and UFC says I can’t wear Reebok in the cage. Stupid stuff like that. It’s not about money, it’s about respect. I’d rather take a money cut to go to another show and get appreciated. I’m sponsored by Reebok, just not allowed to wear it in the cage. I can’t wear Reebok while I fight.”

The former UFC light heavyweight champion has gone 4-3 since losing his light heavyweight strap to Forrest Griffin in 2008, including a submission loss to Jon Jones in 2011 for the title. Rampage is coming off a decision loss to Ryan “Darth” Bader last February in front of Japanese fans at the Saitama Super Arena. Since then Rampage has continued to made it abundantly clear that he officially wants to part ways with the UFC after he completes the last fight of his contract in January against Glover Teixeira.