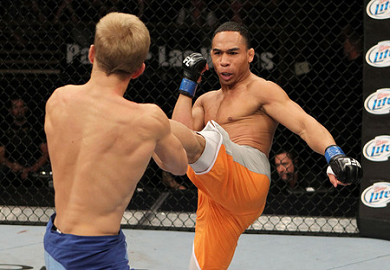 The energetic 125-pounder who won The Ultimate Fighter Team Bisping vs Team Miller at bantamweight back in 2010, has fought as his as 155 pounds, and walks around at 156 pounds.

“I truly am a little fat kid,” he joked.

So far no man has been able to accomplish the task of being a tri-division champion, with Randy Couture and our very own BJ Penn coming close with becoming two division champions.

Dodson is undefeated at flyweight, going 2-0, most recently defeated Jussier Formiga in October to earn a shot at 125 pound champion Demetrius Johnson January 26th at the United Center in Chicago Illinois for UFC on Fox 6.