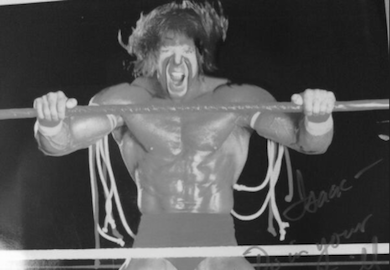 When news recently broke that Wrestling Hall-Of-Famer and WWF Superstar ‘The Ultimate Warrior’ passed away, no doubt all his fans felt a sense of mourning.

Many of the UFC’s fighters and personalities took to twitter when the news broke.

I haven't watched pro wrestling since the golden days but #ultimatewarrior was always my favorite. Sucks to hear he passed away.

R.I.P to the best wrestler of all time and always will be The Ultimate Warrior

Rip the ultimate warrior. That sucks he passed!

Wow, it's devastating to leave the gym & see the news of @UltimateWarrior passing away. I'm glad his story at least got some closure. @wwe

Rest in peace! The warrior was a resident of Santa Fe I was lucky enough to meet him a few times pic.twitter.com/hMxihpGOcD

Sad to hear the news my youngtime idol @UltimateWarrior passed away. My condolences go out to his family pic.twitter.com/0E5z7rlxRm

The Ultimate Warrior died!? Man I use to think I was him when I was a kid. First Randy Macho man now him. RIP #prowrestling

Condolences to @UltimateWarrior 's family, saddened to learn of his passing. He was a legend #WWE #RIPultimatewarrior pic.twitter.com/g6IukZ1DUU

When I was young and wrestled with my dad and brother I was always The Ultimate Warrior, RIP http://t.co/ITRPn2ddqN

As a kid my all time favourite wrestler was @UltimateWarrior Sad to see the legend has passed #RIP #WWEHallOfFame http://t.co/iSfRKwE5qH

Sad the hear the death of one of my favorite childhood wrestlers The Ultimate Warrior. #RIP pic.twitter.com/YHIqXHv8Q1

R.I.P Ultimate Warrior I remember this guy was a beast. My fav wrestler other than Sting, Hulk Hogan, The… http://t.co/fchNDerRSm

RIP ultimate warrior. Atleast you got to experience the joy of entering the hall of fame before you died #legend

This article appeared first on BJPENN.COM
Previous articleAlistair Overeem To Go Under The Knife – First Surgery In MMA Career
Next articleEXCLUSIVE VIDEO | Ross Pearson: ‘I see myself finishing Diego Sanchez’ – Ready For A War
© Newspaper WordPress Theme by TagDiv