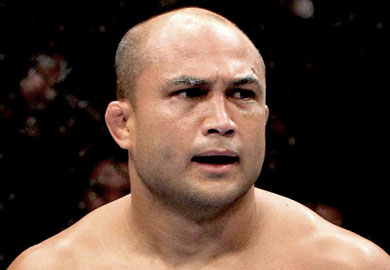 BJ Penn has been on the fence lately about returning to the UFC and has most recently expressed interest in joining the 170 pound weight division if he was to return at all.

Here, in an interview with The MMA Hour, and brought to us by MMAmania.com, Penn talks about his discussions with Dana White on possibly moving to Strikeforce to fight lightweight champion Gilbert Melendez for the title in a fight that Penn claims, just wouldn’t make sense. Whether or not Penn will return is still up for debate, however, Penn has always been a fierce competitor who loves a good fight and would be a challenge for anyone in the UFC welterweight division.

These days, in a stacked welterweight division, it would be a fight fans nirvana to see a legend like Penn enter the Octagon to compete with the top welterweights and make another run for the coveted welterweight title.

“I’m not really excited to jump right into a training camp right now. Me and Dana sat down and Dana said, “I see a lot of stuff and you saying you don’t want to fight anymore.” Me and him just kind of talked and just did a bunch of kind of hypothetical back-and-forth and that was it. I know Dana wants me to fight again a when I go to a lot of different places, I think subconsciously maybe sometimes, fighters, we only seize to fight to regain energy to fight again. I do get pumped up about it when I go to different places and people say, “Come on you got to fight again, you gotta fight again.” I don’t know, I’m enjoying training right now and you never know what the future holds. I mean if Dana put something together and says, “Hey, you want to do this?” You never know what could happen. Being a competitor, you always have that itch. What it is, is that it’s tough. The training camps are tough going and through that and going through the different things and all the different personalities you gotta deal with over time. I mean, I still look at some of the guys up there and, of course, being a competitor I think to myself, “I can beat that guy or I can do well with that guy.” It’s just a tough question and I can’t give any solid question (answer) either way right now.”
Just the fact that Penn is having such discussions is a positive thing to hear for fans of Penn as a ‘maybe’ isn’t a ‘no’, and even though Penn enjoys his semi-retirement, training in his native Hawaii, Penn belongs in the Octagon for as long as he has blood in his veins.