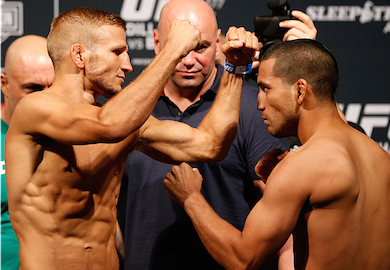 It appears that the UFC can bank on 125,000 buys no matter how bad of a pay-per-view fight card they put together.

August’s UFC 177 event in Sacramento was an absolute disaster from a promotional standpoint, but was still able to generate the aforementioned 125,000 PPV buys according to estimates.

The event was originally scheduled to showcase 2 title fights, at bantamweight and flyweight, but the flyweight bout was pushed back to UFC 178, this after UFC light heavyweight champ Jon Jones got injured and was forced off the September fight card.

With that said, the UFC still had high hopes that their bantamweight title fight rematch between T.J. Dillashaw and Renan Barao would be able to move the PPV needle.

Unfortunately for fight fans and the promotion itself, former 135-pound title holder Renan Barao was forced off the card just 24-hours prior to the event.

So, the UFC was forced to promote Joe Soto (who was scheduled to fight on the cards prelims) in to the main event title fight opposite champion T.J. Dillashaw.

For comparison, June’s UFC 174 event in Vancouver did about the same amount of PPV buys and was headlined by a flyweight title fight between Demetrious Johnson and Ali Bagautinov.

This article appeared first on BJPENN.COM
Previous articleBethe Correia: Rousey hasn’t proved she’s the best
Next articleCung Le: “I did not take any performance-enhancing drugs”
© Newspaper WordPress Theme by TagDiv