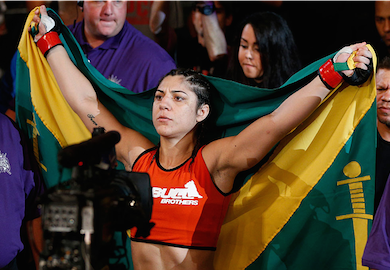 The Brazilian was most recently seen in action at August’s UFC 177 event in Sacramento, where she earned a second-round TKO victory over Shayna Baszler.

The win marked Correia’s second straight victory over a “Four Horsewomen” member, as she had previously defeated Jessamyn Duke at April’s UFC 172 event in Baltimore.

Bethe Correia recently did an interview with FOX Sports, where she pre-warned fight fans that there will soon be a new queen at the top of the 135-pound ladder:

“I already proved to the world that the Four Horsewomen are a big joke,” Correia said. “I just need to conclude my work getting the number one, the leader. … I’m only waiting for the UFC to give me this chance so I can end this group once and for all and show who’s the woman that came to stay and will be the only one to retire undefeated.”

“If it’s in March you can be sure there will be a new champ in March,” Correia said. … “The only thing I recognize [about] her as an athlete is what she did for women’s MMA. But even as the UFC champion she still hasn’t proven she’s the best woman fighter. She just proved she’s the best Judo fighter in MMA. I will show I have a more complete, true MMA game.”

Do you think Correia can be the first women to upset “Rowdy” Ronda Rousey? Sound off Penn Nation!