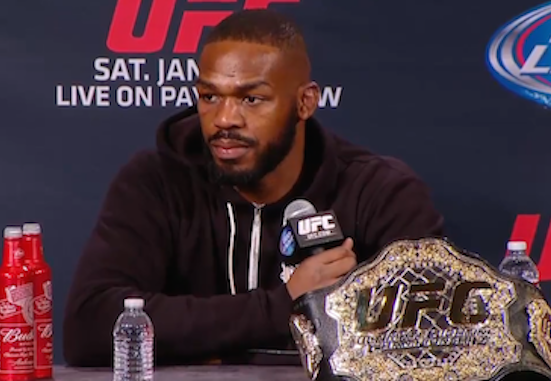 One of the more frequent questions being asked is: When did Jones and his team find out about the failed drug test?

According to sources close to the situation, Jones was not notified by the Nevada Athletic Commission of the failed drug test before the fight. These sources claim Jones and his team were informed by UFC officials on Monday, two days after the UFC 182 event.

NAC executive director Bob Bennett told MMAFighting.com that he would defer to the UFC about when the promotion informed Jones of the news.

The NAC learned of the test failure on December 23. NAC chairman Francisco Aguilar told MMAFighting.com that the commission informed the UFC of the failure around that day. As for why Jones was tested for a recreational drug that is not considered a banned substance out of competition, Bennett said the following:

“That was a bit of an anomaly that will be addressed [at the next NAC hearing on] January 12. It was not a report requested by the NAC. It appears to have been an administrative oversight.”

Jones was actually tested twice on the date of December 4 because, according to Bennett, his first urine sample was a bit “watery.” Both tests came back positive for cocaine metabolites.

Jones’ next out-of-competition drug screening came on December 18. He passed that test, however, he was not tested for cocaine because, as Bennett stated, that was an “anomaly.”

“Just for out of competition drugs such as anabolic steroids, no street drugs,” Bennett stated when asked if Jones was tested for cocaine and other recreational drugs after the December 4 test.

The NAC will not punish Jones for the infraction because, according to the World Anti-Doping Agency code — the same code that the NAC adheres to — cocaine is not considered a banned substance out of competition (“in competition” is listed as the 12-hour stretch before a contest, as well as the time needed to collect any test samples immediately afterwards).

Still, some fighters and many fans  feel that Jones’ recent infraction violated the UFC’s Code of Conduct which states:

“Discipline may be imposed for misconduct, which includes without limitation, the following examples: …criminal offenses relating to performance-enhancing and prohibited substances, or substance abuse …”

The UFC does consider Jones’ test failure a violation of its Code of Conduct, but they are recognizing the fact that he is taking the necessary steps to address the issue (checking himself into a rehabilitation facility.)

The reason Jones will not face any kind of punishment from Nevada is because, as stated earlier, his test failure was for a substance that is not considered banned “out of competition.”

The difference between Jones’ situation and other cases (such as Nick Diaz or Matthew Riddle) is that those tests were administered “in competition” (i.e. after the fight or 12 hours before it).

If Jones had tested positive for the exact same thing “in competition” (by the way, his post-fight drug test has yet to be released), he would be subject to punishment from the NAC because cocaine is considered a banned substance in competition. However, failing for cocaine, as well as marijuana, isn’t punishable while out of competition, according to the WADA code.

Leave your thoughts on this news in the comments section below.