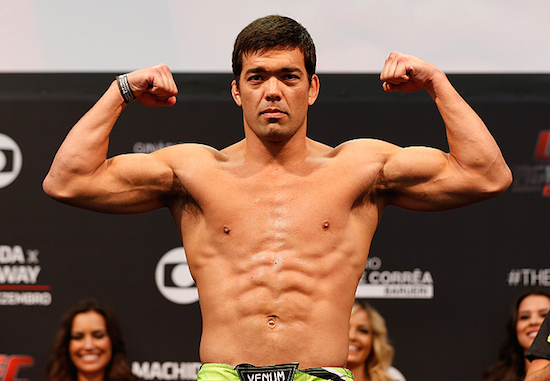 The UFC’s return to New Jersey now has a main event, as UFC officials announced today that middleweights Lyoto Machida and Luke Rockhold will headline April’s “UFC on FOX 15” event in Newark.

Rockhold was the first to announce the five-round main event booking, this via his official Instagram feed.

Former UFC light heavyweight champion Lyoto Machida (22-5 MMA) was most recently seen in action at last month’s UFC Fight Night event in Brazil, where he scored a first-round TKO victory over C.B. Dollaway. That win got “The Dragon” back in to the win column, as he had previously been defeated by current UFC middleweight champ Chris Weidman in the main event tile fight of July’s UFC 175 card in Las Vegas.

Meanwhile, former Strikeforce middleweight champion Luke Rockhold (13-2 MMA) will be looking to extend his current win streak to 4 when he faces Machida this April. Rockhold’s most recent octagon appearance came against bitter rival Michael Bisping, whom he defeated by second-round submission in the main event of November’s UFC Fight Night event in Australia.

UFC on FOX 15 takes place April 18 live from the Prudential Center in Newark, N.J. The main card will air on FOX after prelims on FOX Sports 1 and UFC Fight Pass.

Who do you have winning this key middleweight match-up, sound off Penn Nation!